We are excited that four of our Senior Associates have been promoted to Senior Counsels with effect from 1 January 2023.

Giannis Potsis, Nasia Papakonstantinou, Michalis Severis, and Elena Georgiou have proven to be highly committed individuals with the expertise, loyalty and work ethic needed to be counsels. They have actively represented our law firm throughout the years and contributed substantially to its successful development.

Nasia holds an LLB in Law from the National and Kapodestrian University of Athens and an LLM in European Law from the University of Leicester, and is a member of the Cyprus Bar Association since 2008. She has expertise in banking litigation, corporate litigation and dispute resolution. Nasia is further an insolvency practitioner and is involved in a number of insolvency tasks, including corporate liquidations, bankruptcies, debt restructuring schemes, voluntary arrangements and Receiverships.

Elena holds an LLB from the University of Kent and an LLM from King’s College London, and is a member of the Cyprus Bar Association since 2011. She focuses on corporate, commercial, banking, finance, capital markets, securities law matters, as well as matters relating to shipping finance. She advises on corporate financings and restructurings, advising inter alia on asset acquisition and sale, setting up security packages and safeguarding shareholder protection. She has advised and represented major international credit institutions, Cyprus public companies with international listings, large international oilfield service groups and corporate groups. Elena is further certified with the Corporate Finance Certificate by CISI.

We wish our Senior Counsels every success in the execution of their new responsibilities and duties, and in the continuation of their successful course. 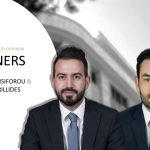 Angelos Onisiforou and Stylianos Trillides have been promoted to Partners